Total analysis of each penalty at the World Cup: fake performers, protection of stars, control over the state of the point

Total analysis of each penalty at the World Cup: fake performers, protection of stars, control over the state of the point

All strike trends in regular time. 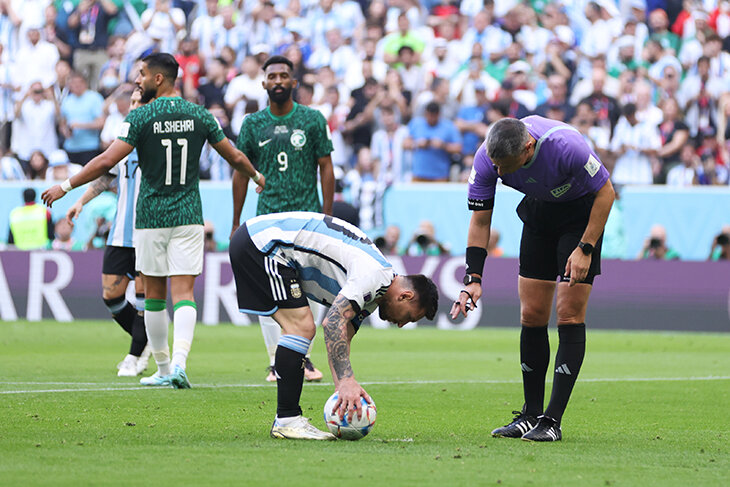 Penalties are one of the most dramatic moments in football. Psychology, movement, statistics of strikes from the point have long been carefully studied by journalists and scientists. The value of penalties is growing, after the introduction of VAR, the number of 11-meter kicks has increased dramatically: the 2018 World Cup broke the record, there are fewer of them at the 2022 World Cup, but the tournament still took second place in recent history. 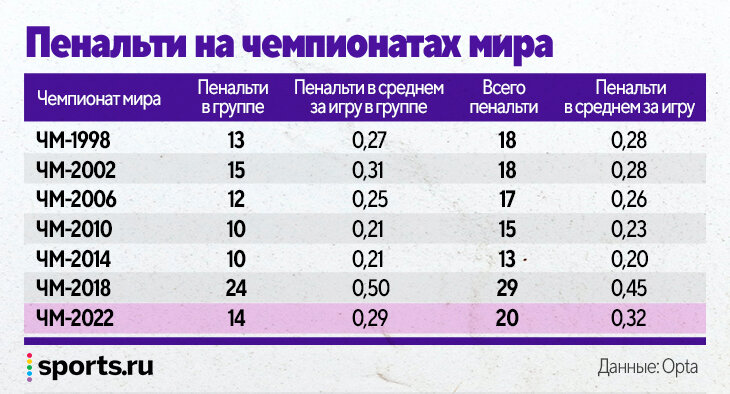 Data before the final and match for 3rd place

Psychology is the most important component of implementation. Many studies indicate that in the post-match series, the likelihood of a goal drops with each shot – all because of nerves and anticipation. Sven-Göran Eriksson recalled: “If I could go back in time, I would go to the 2006 World Cup with a psychologist to work on the mental problems of the players before the penalty.”

Yes, the example is not entirely correct because of the situation itself – the probability of conversion in the game is higher than in the penalty shootout. However, the era of VAR turns penalty kicks into an analogue of post-match torment – sometimes players wait for the referee’s decision for too long. These are new conditions: a pause in a crowded stadium puts pressure on the penalty taker, and many dream that everything ends faster.

The 2022 World Cup is a great example of how teams are adjusting to the new reality and protecting their stars.

At the World Cup, we saw five fake penalty takers: partners took pressure away from the striker, and then gave the ball away

You may be surprised, but the first example is related to Messi. It is obvious that it was Leo who was the main penalty taker of Argentina, but in the opening game it was not him who brought the ball to the spot (1:2).

Judge Slavko Vincic did not immediately notice the violation and already before the next standard he received a hint that the combat between Paredes and Abdelhamid should be reviewed. After the decision was changed, an argument broke out near the penalty mark: Lautaro took the point, Di Maria and De Paul stood nearby.

Messi stayed a couple of meters away from the fire and tuned in while the others talked to each other. Leo took the ball only after the referee calmed everyone in the penalty area. Then Di Maria acted as a bodyguard: Al-Faraj went into the penalty area, Angel approached Leo and left the square only after the captain of Saudi Arabia (the alarm was false – the Saudi passed by Messi, did not tell him anything). The next example is from Saudi Arabia (lost 0:2 to Poland). After watching the replay, Al-Breikan took the main blow: he talked with the referee, surrounded by four opponents, and then because of Lewandowski, the number of Poles increased to five. When the referee dealt with the Poles, Al-Breykan set the ball on the spot and after a few seconds Salem Al-Dosari approached it. The change of players did not help – Schchensny took a weak blow from the Saudi ten. The next fake penalty taker trick worked. Ecuador centre-back Incapie demolished winger Sarr. It cannot be said that the pressure of the Latins was serious, but Ndiaye stood with the ball while the referee Turpin talked with Grueso and Estupinyan, and then quickly gave way to Sarr (as a result, Senegal won 2:0). Brazil is the first team to use a fake penalty taker in the playoffs. Theoretically, Neymar did not even need protection: the Koreans behaved adequately and did not attack Rafinha, although they still talked with Turpin, but after the end of the conversation, the winger gave the ball to the real performer. For the first time, the partners stood up to protect the penalty taker from the impact of opponents in the match between the USA and Wales (1:1).

Then there was no doubt that Gareth Bale would strike: he went with the ball to the mark. Then Bale was dragged into the fight: Aaronson came up from the back, and Acosta and Adams appealed to the judge a little to the right. Perhaps they also addressed the striker – it is difficult to draw conclusions from the far camera, but Moore drove the Americans away from the captain of Wales. Ramsey joined in to help. It seems that in this episode, Moore raged even more than the Americans. Aaron continued to defend Bale when the referee switched to goalkeeper Turner, first pushing one American away and then switching to another. Perhaps Gundogan’s penalty against Japan is a similar story. It was not entirely clear in the broadcast when exactly Ilkay took the ball, but when he was at the spot, Yoshida entered the penalty area. It seems to support the goalkeeper Gondu – the Japanese walked next to Gundogan and seemed to say nothing. But Kimmich still promptly joined the episode and kicked out the Japanese. Portugal showed several options for defending penalty takers. Against Ghana (3:2), it was clear that whoever took the ball would hit Ronaldo. Before the blow, Cristiano kept a little to the side, and then approached the point – at that moment, Bruno Fernandes stood between him and Ayu, and then Dias joined the episode. It turned out to be more emotional against Uruguay (2:0).

The penalty was awarded after the inclusion of the VAR. The Portuguese occupied the point (Gonzalo Ramos stepped on it) and did not let the Uruguayans go there (Ramos pushed Coates), and then Bernardo reacted aggressively to the provocation of Vigny, who touched the mark, although he did not damage it in any way, and drove de Arrascaeta away. Bruno walked not far from the cluster, and the Portuguese stood on the point and even trampled it. The Ghana national team acted in a similar manner in the match with Uruguay: the Africans took the point and did not let Darwin Nunez near it (they even pushed him out). Aiyu immediately took the ball, but he did not have to defend it – the main attention was riveted on the referee. Ghana’s tactics did not help – Ayu shot very badly (final score – 0:2). The events before the penalty in the Davis match in the Canada-Belgium (0:1) match were not broadcast due to the VAR, but the Canadian defender Lareya drew attention to Witzel, who entered the penalty area (he said something to the referee) and sent him out of the line. Doesn’t look like a full-fledged ward for Davis, but the Canadians were clearly on their guard. True, the partner’s initiative did not help: Alfonso burned out and lost the duel to Courtois.

In the quarter-final against the Netherlands, Argentine Leandro Paredes quickly took the ball from Noppert and carried it to Messi. Leo immediately went to the point, and the goalkeeper immediately went to him, after which Paredes and Enzo Fernandez joined the episode. Before the first English penalty in the quarter-final, no point or Kane defense was required – the French did not touch Harry at all. The second penalty caused much more controversy. Harry kept a short distance from the fire. At a certain moment, Bellingham ran up to the point and stood on it (not shown in the main broadcast, so the camera from the stadium was used, which is not very visible), and spent the end of the episode between the striker and Giroud (he left when Olivier calmed down). Sometimes the batter is not pressed by anyone. For example, when the teams are in a stupor, the penalty does not solve much or the players are concentrated on the referee

Qatar were in a difficult situation: a poor start to the home tournament, the dominance of Ecuador, an early own penalty after a failure in the center of the field. But after the whistle, everyone humbly waited (a couple of players violated the boundaries for just a few seconds – the guests did not pay attention) for Valencia to perform (Enner did not have to patronize). England were indifferent to Iran’s penalty at 6-1: Trippier went to the ref and stood next to the attacker (seemingly to support Pickford), but no one from Iran reacted to Kieran. The Polish national team almost did not follow Lewandowski before hitting the Mexican goal: Krychowiak was in the penalty area when Moreno said something to Robert, but Grzegorz was distracted by the referee (although he may have complained about Moreno), who drove the Mexican away from the striker. In the playoffs, Lewandowski did not need protection: France calmly accepted the decision after watching the VAR (leading 3:0), so they made way for Robert. But before the second performance, disputes arose between the French and the judge, then Zalewski ran to the episode (while the opponent did not try to influence Lewandowski). It seems that Torres’ shot in the game with Costa Rica is generally the fastest. A little more than a minute passed between the violation and the blow. It’s entirely possible that something happened off-screen (the director started a replay), but the speed of the execution indicates that Marco Asensio, who picked up the ball, simply passed the ball to Ferran before the successful execution. The Polish national team practically did not put pressure on Messi (0:2). Initially, Schchensny had the ball, but Wojciech quickly gave it to Leo. Lewandowski looked at Messi, standing near the point, but did not intervene, although the Argentinean De Paul was ready to stand up for the leader (the camera does not pick out the exact location – it seems that Rodrigo was standing on the point). But calmness did not help Leo – Wojciech parried the blow. Against Croatia, De Paul again defended the point. On the top camera, you can see that Rodrigo is the only Argentine who participates in the episode. True, Messi did not need systemic protection: at the beginning of the episode, part of the Croats immediately surrounded the judge, and the other went up to Livakovic. As a result, Leo was left alone, the situation continued before the penalty – no one put pressure on Messi. Let us fix the main types of command behavior.

1. Fake performers (take pressure on themselves, give the ball to a partner when opponents leave the penalty area).

2. Active protection of the stars from moral influence (they occupy a point, do not let rivals in).

3. Passivity, which creates comfortable conditions for the opponent.

It is still difficult to draw a real correlation between implementation and behavior: teams with fake penalty takers have already missed (so far one case out of five), the defense of the stars also did not always affect the performance (Messi and Davis lost duels when their partners were ready to help), Lewandowski could unsuccessfully shoot from – for changing the run, although the Poles almost did not defend him.

The key conclusion is that at a short distance, the national teams work out the details even at the stage of preparation for a penalty kick. Gradually, players and coaches realize that opponents seek to influence the psychology of the striker, so the teams go to countermeasures – they create conditions with the help of various tricks to provide comfortable conditions for the leaders.