On the night of Saturday, January 14 to Sunday, January 15, the NFL will begin elimination games. To make it easier to prepare, we have made a rating of teams at the moment and a game that will help you choose your favorite team if you don’t already have one.

In this text – the forecast of several authors, how the playoffs will turn out. We predict just a couple of things: who will make it to the Super Bowl from each conference, who will win it, and who will be the main loser of the playoffs. And also from each author – a random forecast for any event that will happen in the knockout matches.

Super Bowl. In the AFC, I’m torn between Kansas City and Cincinnati. It seems to me that the final of the conference between them will be determined by some nuances and small episodes in the end. Why not Buffalo? Weak sekondari line. This team is required to engage in gunfights to win, but Allen won’t shoot Burrow. In addition, the Bengals and Chiefs have an important quality for the playoffs – drive, courage. 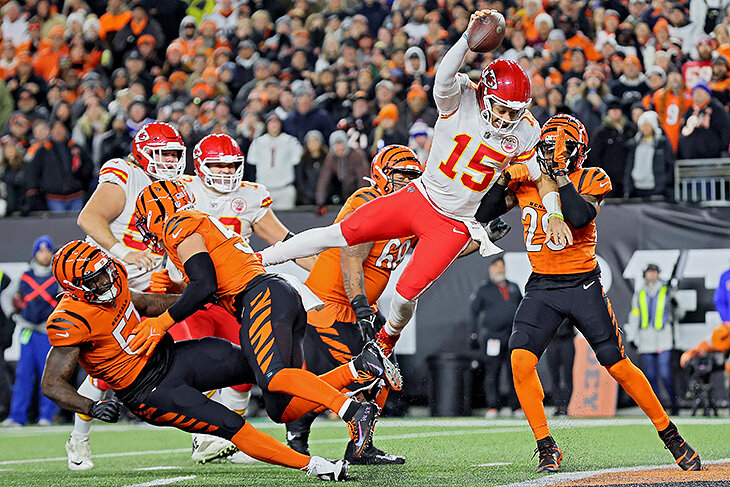 From the NFC, I have only one contender – “San Francisco“. Kyle Shanahan’s machine runs smoothly, their stats for a 10-match winning streak are simply amazing. The last chance to stop them was gone when it turned out that Brock Purdy is a skilled and even in a good way brazen quarterback.

San Francisco will definitely take revenge on Kansas. As for the confrontation with the Bengals, there is less certainty, but since one contender is needed, then let the Photoniners be.

Major loser. “Philadelphia”. Whenever the first seed is eliminated after the first playoff game, it is seen as a resounding failure. The Eagles have had a very nervous last month, losing two games, and the ones won were thin. Injuries piled up at the most inopportune moment, including Jaylen Hurts. A week’s rest can knock them out of the rhythm of the game, and in the first match, in any case, they are waiting for a rival in the division.

Random forecast. The outcome of the match between the two luckiest teams of the season, Minnesota and the New York Giants, will be determined in the last seconds, when the kicker does not score a field goal. It remains only to see whose kicker it will be.

Read First&Goal on the site or subscribe to the telegram channel .

Super Bowl. Speaking of the NFC, it would be nice to get to the San Francisco Super Bowl with Brock Purdy. Rookie “Mr. Unnecessary” in the main game of the year? Fantasy! Moreover, the Niners changed three starting quarterbacks in one regular season. Considering how the team accelerated for the playoffs, the chances of such an outcome are very high. I believe in it.

In the context of the AFC, it does not seem that a surprise team can appear that can dilute the trio of Kansas City, Buffalo, Cincinnati. Each of these three has many strengths, including great quarterbacks, a great set of offensive weapons and decent defenses. There are also problems. But on average in the hospital, these are equal contenders. For a change, it’s time for the Bills to return to the Super Bowl, especially since Allen and company have been knocking on its doorsteps for a long time. 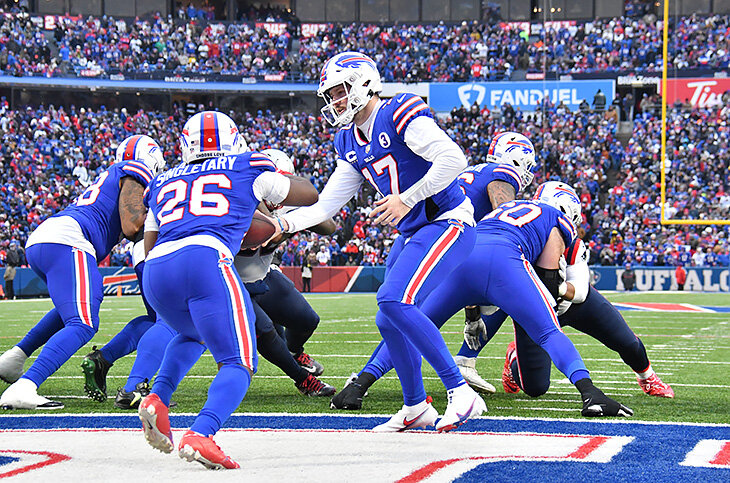 As for the Lombardi Trophy winner, let history once again laugh at Buffalo by giving them their fifth Super Bowl loss with zero wins: Josh Allen is still young, he will get more than one chance at the championship ring. But I want to extend the line of “Mr. Unnecessary” to a happy ending. San Francisco’s sixth win in franchise history would tie them with the leaders the Patriots and Steelworkers, and Purdy himself would become the fourth most recent pick to win the Super Bowl after Marty Moore, Jim Finn and Ryan Succope. , and at the same time the first “unnecessary” quarterback who will submit to the championship.

Major loser. Tampa Bay. The suffering of the entire team and Tom Brady in particular, associated with getting into the playoffs, will quickly end. A disappointing performance in the wild card round and more talk of Brady coming back into retirement. Only this time it will be for real.

Random forecast. Jaylen Hurts will break Colin Kaepernick’s record for most rushing yards earned by a quarterback in one of the playoff games. In the 2013 Divisional Round, Kaepernick ran for 181 yards against the Packers defense. By the way, Justin Fields has the best rushing record in the regular season (178 yards). So Herts will automatically cover both indicators.

Super Bowl. And then I thought – why should I change my pre-season prediction if it is still working and in some ways even more working than before the season? Bills – Photoniners! So I said in August, so I will stay now. And even though the Bills have more problems now than they had before the start of the season, but the motivation has increased noticeably. If Josh Allen turns on his turbo mode in the playoffs, it will be hard for everyone. Well, the Niners – heh, it’s just expanse for cinematic perception of this whole story. Their roster is too good and their quarterback is too arrogant robot for me not to keep believing in them. This series, for them, should end without the seed for a second season – just a victory in the Super Bowl. 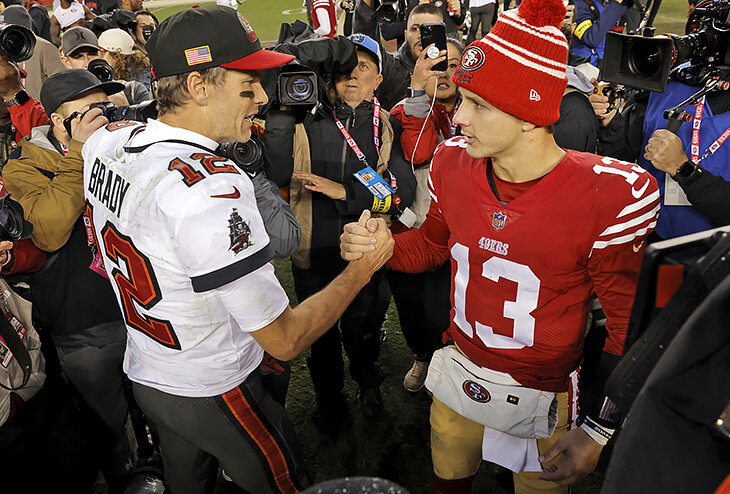 Major loser. Miami Dolphins and Baltimore Ravens. Two teams that could fight their rivals were left not only without starting, but even without second quarterbacks. What could be worse for an ordinary fan who would like to see intrigue?

Random forecast. The teams that win those conferences will not play in the conference finals. The Chiefs still won’t be able to beat Justin Herbert thin for the third time this season, and the Eagles will again stumble on Tom Brady.

In the AFC, it’s simple: Buffalo, Cincinnati, and Kansas City are head and shoulders above every other team in the conference. Each team in this trio has elite offense with top 3 quarterbacks. But unlike their opponents, the Chiefs’ defense, to put it mildly, does not look like a champion (21.7 points per game, 16th in the league). Patrick Mahomes can cut through any defense, but is Steve Spagnolo’s unit ready to stop Josh Allen and Joe Burrow? I do not think so.

When choosing between the Bills and Bengals, it’s easier to flip a coin. Both have elite defenses (2nd (17.9 points) in Buffalo, 6 (20.1) in Cincinnati) despite the loss of elite players in this half of the field until the end of the season (Von Miller, Chidobi Avuzi). Playmakers like Ed Oliver, Matt Milano, Tremaine Edmunds and Jordan Poyer (plus the possible return of Mikey Hyde) on one hand and DJ Reeder, Trey Hendrickson, Logan Wilson and Jesse Bates on the other make these defenses particularly strong.

My choice in favor of the Bills is justified by a more balanced attack. Both teams are top 10 in passing yards (8th and 7th respectively) and are loaded with elite receivers such as Stephon Diggs, Jamar Chase, Ty Higgins and Gabrielle Davis. But the Cincinnati rushers are 28th after a regression by Joe Mixon, gaining just 4 yards per rush. At the same time, Buffalo are ninth. The pairing of Devin Singletery and James Cook, spiced up with Allen’s talent for jumping defenders in the open, is a key factor in the Bills’ success. 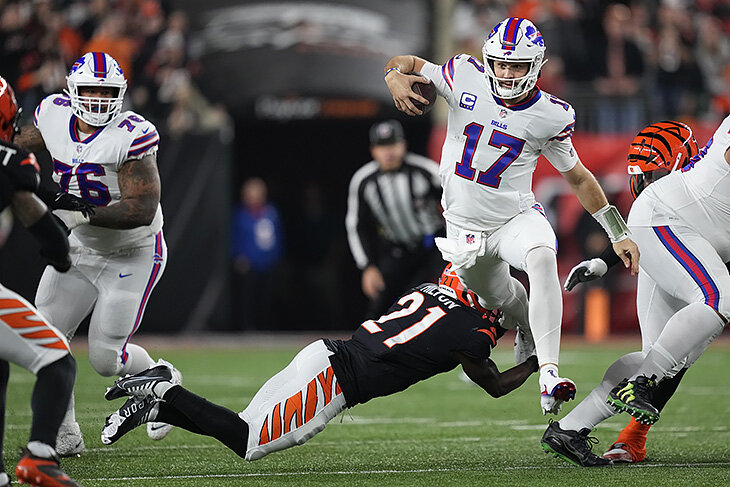 In NFC, things are much more complicated. A couple of weeks ago, there was a clear favorite – Philadelphia. But Jaylen Hurts’ injury raises a big question mark, can he lead a team when he’s not at 100% of his potential? How will “Mr. Unnecessary” Brock Purdy perform in the big stages, managing the San Francisco offense, and won’t Kyle Shanahan get too clever at the right time, as he did in Super Bowl LI? Minnesota has won 13 games and has a -3 points difference. Prime-time Kirk Cousins ​​and the NFL‘s fourth-worst defense (25.1 ppg) are clearly not a championship formula.