Khachanov has his second Slam semi-final in a row. Busily closed the opponent with an injury

Khachanov has his second Slam semi-final in a row. Busily closed the opponent with an injury

The Russian has not won a title for four years, has not defeated guys from the top 10 for more than three years, but at the Grand Slams he has been just handsome lately. 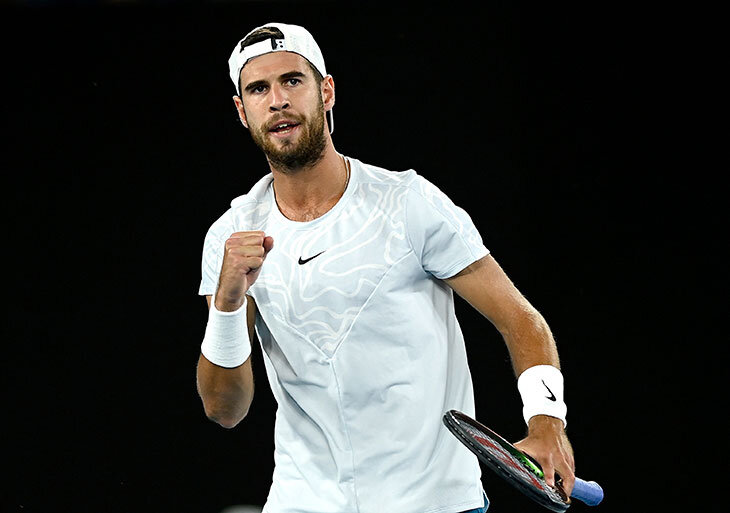 At the end of last season, Karen made it to the semi-finals of the US Open, and now he has reached the 1/2 in Melbourne. Due to these great results, he will return to the top 15 on Monday (for the first time since March 2020), and in case of further victories, he can overtake Daniil Medvedev and return to the top 10.

At the Australian Open, he has not yet met opponents who are much higher in the rankings, but he does his job beautifully and confidently. And this is exactly what he lacked during the crisis that came after the breakthrough season of 2018.

True, the quarterfinal against Sebastian Korda ( who impressively eliminated Daniil Medvedev ) ended sadly – the American withdrew due to an injury to his right wrist with a score of 7:6 (5), 6:3, 3:0 in favor of Karen.

It is not very clear when Sebastian got injured. Already at the beginning of the match, he shot into huge outs along the length from the forehand, but then it seemed that the matter was in the conditions – because of the rain, the match was played under a closed roof, and this affects the control of the ball.

As a result, already after the first games, Korda sent the rackets to tighten the strings – in order to slightly reduce the tension and better control the blows.

Apparently, this helped, because by the end of the first set he played out, played the serve for the set and transferred the game to a tie-break. But there Khachanov was a little more stable and powerful and finished with a magical backhand down the line.

In the second set, they went exactly on the score, but Karen was closer to the break – he had three chances in two different games. And with the score 3:2, the American called a doctor who applied a tape on his wrist.

With the score 3:3, Korda lost the serve from 40:0, making five unforced errors in a row. At that moment, it became quite obvious that he was hard to hit – even though he has a technique in which the wrist is not really used very much.

But the struggle did not end there, Korda immediately had a chance to win back. However, Khachanov took down two break points with powerful innings. And here the match actually ended, because Sebastian completely lost stability in strikes and frowned almost after every forehand.

It is important to emphasize here how collected Khachanov remained. It often happens that when seeing an opponent’s injury, tennis players slow down a little, lose the thread of the game and also begin to suffer. This did not happen to the Russian – on the contrary, he, according to his impressions, began to attack the opponent’s right side even more actively in order to maximize the advantage that had appeared.

In general, Karen had an excellent match both in terms of the level of the game and in terms of psychology – he did not allow anything to knock him off the tennis that brings him success. This is very valuable.